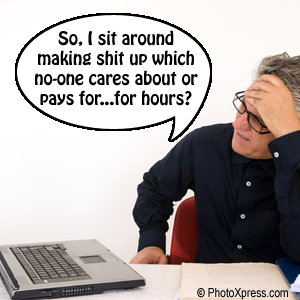 I’m on the home straight of my novel, ‘Blindsided‘, just 4 chapters to go and I’ve now gone and got Manflu which usually renders men useless and depressive oafs.

Now I’m thinking this novel is probably crap; the story is boring, characters are one dimensional, there’s no flare or finesse, along with the fact my first two novels are going nowhere fast.

So the following tweet I saw struck a chord…

Did I ruin my life by devoting my time to writing books 2,000 people will read? Etc. Leads to bizarre in-fighting and defensiveness.

If I allow the paracetamol hit to wear off and finish my hot lemon drink, I might be able to grab some positives.

Finishing the first draft of a novel is something to be proud of. No-one’s going to see it. The subsequent drafts is where I can add finesse and depth.

In the break between first and second drafts, I’m planning on self-publishing my first novel which is something I’m very much looking forward to. If I could get 2,000 people to actually buy it, that would be amazing.

Writing is a waste of time if you look at it financially or logically. It’s a crazy waste of time but, to paraphrase Churchill, ‘What are we fighting for‘ if we don’t indulge our creative sides.

I could better spend my time painting fences, learning to cook, learning Spanish, working more overtime, etc but I wouldn’t be as happy. I should remember that sometimes; the act of writing and making shit up does make me happy even if it doesn’t always make itself immediately apparent.