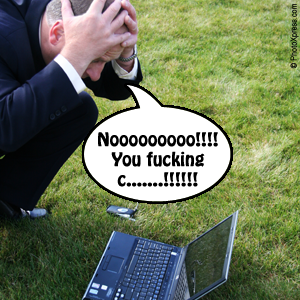 This is a tale of pain and despair but it should be enjoyable…for you, because it didn’t happen…to you.

In a nutshell, I lost 5,000 words (3 chapters) of my latest novel, ‘Blindsided‘, after getting up some good momentum.

I’m a switched-on technology user, well versed in the various methods of backing up your stuff but I have been defeated. I’ve been using a MacBook Air for about 3 years now and I only really use it for writing so I’m not a bona fide 100% Apple Genius, but I’m no mug.

That’s what I thought, anyway.

Little did I know that Lion OSX has a ‘unique’ feature where it ‘locks’ documents that haven’t been used for 2 weeks. I’m not sure how my novel got sucked into this helpful fucking ‘fix’ but it did. It hardly goes 2 days without being amended, let alone 2 frigging weeks.

The other helpful feature is that you can still USE a fucking locked document so it behaves like an ‘editable’ document.

So, there I am, typing away watching the words appear on the screen, hitting save, no warnings appearing, everything’s tickity-boo.

Then iTunes needs updating and the laptop needs restarting…

…the laptop restarts, the applications open and there is my novel…right at the beginning of Chapter 14…hang on! I was on the home straight of Chapter 16!

Cue swearing. Then mad searching on laptop, Dropbox, desktop, external hard drive, then frantic searching Google for answers. I find out about the helpful locked file feature. I then download some software to recover the file but because it was locked, it was never saved. So recovering a deleted document won’t help. Dropbox only updates a changed file.

I quickly knuckled down and determinedly began rewriting the past 3 chapters before I forgot them. I couldn’t afford to sit back and curse those fucking merciless computer Gods for long.

Yes, it would be a self-hating, masochistic way of producing a novel but an interesting approach nonetheless.

After all this, I’m back where I should be, breaking new ground on the first draft. I’ve double-checked my backup procedures, upgraded my writing software from Write 1 to Write 2 and turned off file locking (if you want to know how to turn off file locking in Lion OSX then read this, I highly recommend you do).

I think the lesson today is; you can never be too complacent. Computers will do their best to fuck you somehow.