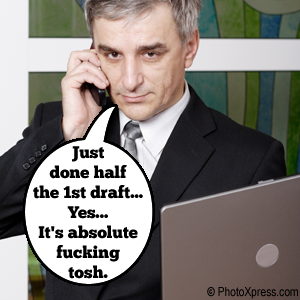 Just finished the first draft of the first half of ‘Blindsided’! You have to celebrate these little milestones otherwise life is just a series of smashing blank pages without reward.

This novel is a game of two halves with a little bit of an epilogue of extra time at the end.

That’s where the football metaphors end.

(I suppose submitting it to agents is a penalty shoot-out, but nevermind…)

Each half is written in the first person of a couple. The first half as the guy after they split. The second half is through the woman as they get together.

Just spent some time today getting into the mindset of the woman and what she’s going to do throughout this second half which actually comes before the first half, chronologically. So, there’s that to get my head round too.

How’d the first half go, Ben? Thanks for asking, not bad. Some bits I really like, others I was thinking I’m going to have to rewrite this whole bit as I’m writing it. This is a different novel to the previous two and it’s been a different experience writing it but as with the previous two, the second half feels as though it’s going to get easier as the momentum builds and you gain confidence from seeing the word and page counts rise.

The first half is always a bit of a slog with doubt and second thoughts creeping in but funnily enough, as soon as that first half was completed it immediately felt better than it had all the way leading up to it. It’s completeness adds something positive to it that you can only see once it’s complete.

I love rewriting. I think it’s probably what I love most about the whole process because you’ve done the hard creative stuff and slogged through the first draft. Rewriting is tarting it up, correcting errors and making it flow – and I’m looking forward to doing that with the first half. I think that’s a good sign, right?