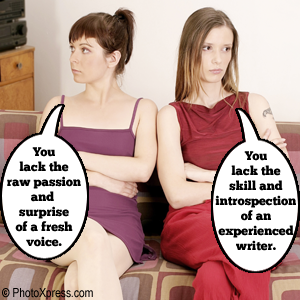 I’m in that sweet spot situated between completing the first draft of my second novel and giving it some breathing room before I go back and see if it’s complete jibberish or not for the second draft.

In trying to clear my mind of the second novel, I’m drawn back to my first novel.  I’ve been punting it around with the occasional tyre kicker taking an interest but nothing concrete is happening.

I’m still happy with it but I’m wondering if it needs another going over again, especially now I have more experience and more time now.  Although there’s a new pressure, is it as good as the second one?

If not, I should go back to it.

If it is, have I learnt nothing?

Maybe it’s just the first 3 chapters that need refreshing because I’m not getting much joy out in the wilds.  Maybe it’s comparing apples to oranges.  Maybe I’m bored.  Maybe the first one was purely an experimental diatribe vomiting out of my system allowing something of more substance to spring forth?  Maybe there’s not much wrong with at all and I should just let it find it’s own way?

I don’t have kids but I have younger brothers, and I can imagine this is how a parent might feel when a younger child asks “Can I get some fireworks?” – “No, you know what happened to your older brother last year.”  The older brother gets to try all the new experiences and gets damaged, whilst the younger one has a safer yet more sterile upbringing due to hindsight.

Or maybe it’s not a sibling rivalry but more akin to comparing girlfriends.  There was your first love and now your current love.  Was the first one better because it was new and intense or is the current one better because you know what you want, less intoxicated and able to appreciate the finer points of being with someone?

Maybe it’s not the same as your position within your family or emotional connections but as writing is an experience and a journey, maybe it’s like a parachute jump.  The first time is utterly amazing, the world rushing towards you as the sky falls away, leaving you exhilarated as your feet touch terra firma. Yet it’s the subsequence jumps that allow you to look around, glide a little, listen to the wind, appreciate the freedom without your heart getting stuck in your mouth.

Maybe novels are not like any of these but more like winning medals and trophies.  The first is an acheivement you hope to repeat, a proud moment where you fought against writers block, defeated dead-ends, tackled plot holes and crossed the finish line.  The second proves you’re not a one-hit wonder as you decided to do it all again.  The third, although you’re much more experienced is no less of an acheivement.  Each new title a culmination of practise and hardwork, coupled with determination and a slice of luck here and there.

Have your feelings changed towards an earlier work after completing a new one?