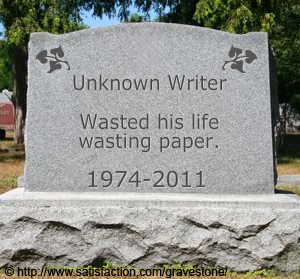 Sometimes I think, “What the hell am I doing, who the hell do I think I am?”

You know those first few episodes of X-Factor or Britains Got Talent where some self-deranged idiot has convinced themself they can dance/sing/act/juggle but are quite plainly rubbish?  If only they’d recorded themself sing, they’d realise!

Sometimes I think that’s me.

So why am I wasting my time doing some crappy job which leaves time to write crap?  It feels right.

A few times over the past couple of years I’ve done some job hunting within my previous career of internet marketing and it makes me sick to my stomach.  The thought of continuing a career which would leave less time to write albeit earn more money, doesn’t feel right.

There are some good posts about this dilemma by Gareth Powell ‘Balancing writing with your day job‘ and Joanna Penn ‘Where do you find the time to write?‘.  I’ve basically gone for the crappy, low engagement job to pay the bills so evenings and weekends can be filled writing…well, mostly anyway.

The flipside to this is, what if I’m a crap writer and I’m not going to go anywhere….ever?  I’m totally wasting my time.  I could’ve sold out and become a banker where being crap is not a barrier to an obscene bonus.

Amongst the form rejections there’s been a couple of glimmers of hope in terms of encouraging feedback, plus I’ve had two short stories published so I’m not a total tone deaf wannabe but it doesn’t look like I’m Leona Lewis either.

There was a great Twitter rant by Kevin Smith a few months back which included this snippet;

Don’t pursue a role, LIVE that role. Like my sister told me, back when I confessed I wanted to be a filmmaker…“Then BE a filmmaker,” she said.

And that’s when she gave me the million dollar advice…

And it sounded artsy-fartsy as fuck, but it was CRAZY useful advice. A slacker hit the sheets that night, but the CLERKS-guy got out of bed the following morning.

It’s easy to say that when you’ve made it but there were some kernels of truth in there too; do what makes you happy, you make your own luck, don’t give up, focus…etc.  Also, he’s been where I am now, nowhere.  Doesn’t matter where he is now, how many of his contemporaries and peers are still nowhere, he’s someone that has got somewhere by living what he wants to do.

I’m not sure what this post is about.  Maybe it’s a message to say yes I’m an educated, sane, emotionally grounded individual whom could do many things with his life but is throwing it away trying to write something that someone else might like.

Yes, those around me have got careers, earning half decent money, paying off mortgages, going on holidays abroad, decorating bedrooms and topping up their saving accounts, all things I don’t have but I’m not that bothered. All around in magazines, TV, film, online are measures of where you should be and what you should desire.  None of them suggest doing a fairly menial job to support a passion that probably won’t pay and if it does, not very much.

I’m not poor. I’m not complaining.  I don’t need a hug.  This is merely a meditation on my present situation to be sent out into the ether.

The elephant in the room is that it feels right and I’ve never been happier.