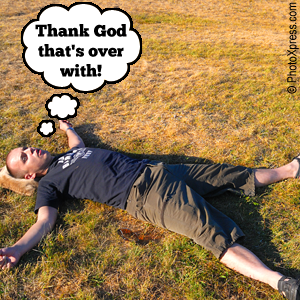 In the early hours of Wednesday I finished the first draft of ‘Broken Branches’, stubbornly sitting up in bed determined to complete it.

I gave myself the deadline of 31st December 2010 to finish the novel, having started on 1st Jan 2010, I failed by 5 days but, to be honest, I’m well pleased because I didn’t pull my finger out of my over-preparing arse until about May plus I had a meltdown sometime in August.

Still, I beat the 18 months it took to write the first draft of my first novel ‘Railroaded’, so either I’m getting better and more efficient, or I’m just a more bloody-minded hermit than before.

One thing about first drafts, especially of your first novel, is that the end is never in sight.  Even when I was starting the last chapter of this one, my second, it seemed miles away.  There seems to be a nagging uncertainty that you’ll never finish which only disappears when you write that last line, sit back and believe that it truly is the last line.  I think once you’ve reached that point of your first novel, every other piece of writing after is easier.  I kept that memory for the home straight and it served me well.

Looking back on this first draft, it was mainly a pleasure…when I had a plan.  I ran into difficulties when I’d written all the brief chapter plans I’d thoughtout beforehand and found myself on the precipice of tabula rasa territory.  A small panic flooded the mind like when you’re standing at a shopping till and realise you’ve forgotton your wallet.

The secret is to keep going.  Slog it out, suck it up and stay calm.  Look at the situations as the characters inside the story, not as the author.

I’m happy with the story, the plot and structure makes sense (from what I can remember) and I’m pleased with the way everything comes together.  For some strange reason I’m really pleased with the last couple of paragraphs, so even if it turns out like a boring 0-0 draw in the driving rain, there’s a 30 yard screamer in the 93rd minute of extra time.

It’s about 52,000 words which is well short of a novel but I’m an expander.  To keep the first draft motoring along and ticking over, I don’t bother with description, in fact I prefer this as the characters aren’t fully developed in my mind plus towards the end you may find that someone needs to be less outgoing than you imagined, or has to have black hair, a particular job, comes from a specific place, etc.

I’ve already got a list of things to add and keep in mind when doing the second draft, which I’ll blog about later, but the big aspect I love about the second draft is crafting and adding some poetry into the prose.  Taking my time with every chapter, scene and character.

I can afford to embelish and hone a little, mould it into something worth giving to someone else to read.  First though, I’m going to bask in the completion of my second novel…