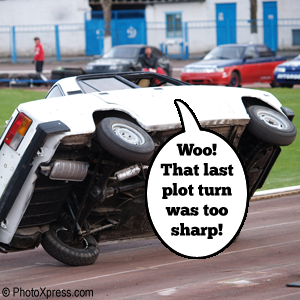 Finished Chapter 20 over the weekend which is a great relief as the past 2 chapters have been a bit of a headache and caused me to have a slight speed wobble just as my momentum for finishing the novel was building up.

A few plot lines had me spiralling into dread about their believability and clunkiness.

On the one hand I’d planned the novel to the end and had built up good momentum to get the thing finished by the New Year.  On the other hand, I had this nagging feeling prodding me that I had to do a little backtracking to fix some stuff.

The first draft is not a place to edit or seriously dwell on things, just get it done.  There’s a good post here by Emma Newman called ‘Four pillars of the first draft‘ going into more detail.

I had a major speed wobble near the beginning of this novel, but this one was just a few minor indiscretions needing to be ironed out to reach a satisfactory ending.  Nothing worse than a novel that ends badly or with a whimper.

So, I briefly ignored advice I’d received from the sage Max Barry, ‘Don’t let the editor into the room‘, and I opened the door to him. Begged and pleaded with him to fix my mess.

He did.  It wasn’t hard, just had to delete a bunch of overly-complicated factors and things seemed to pan out after that.  I’ve since banished the editor until the second draft when he can go to town on this thing.

Only 3 chapters to go AND it looks like I’ll achieve my self-inflicted deadline of finishing it by New Year.