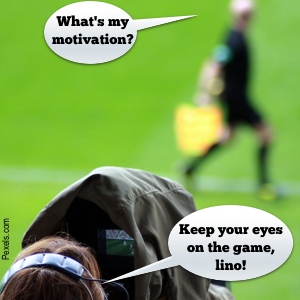 So, I’m three novels in, and there’s nothing much really happening in terms of trying to snap up an agent, snare a publisher or catch the eye of anyone who’s anyone. I self-publish my first novel with sales figures that would humble a homeless, first-time, tuneless busker with a mangy dog. Now what?

Enter the glitzy world of film making, of course!

I’ve written novels, short stories, poems, song lyrics, a novella and shopping lists but the nearest thing I’ve written to something being performed is a one-act play for a creative writing evening course I took over 10 years ago when I first got into all this chicanery. I thought it was quite funny. It was set in a toilet.

Anyway. I also need a fresh challenge rather than just plodding straight into a fourth novel, so  after watching a couple of bad films, I thought I could do better and should put my money where my mouth is and try to write a screenplay. But what kind?

I like football but it appears the movies do not like football. My secondary motivation, after wanting to attempt to write a screenplay, is to make a decent football movie. Can you name one? I rack my brains and ‘Mike Basset England Manager‘ is at No.1. Don’t talk to me about bloody ‘Escape to Victory‘ – Stallone in goal? Give it a rest, son. The rest of the football canon consists of hooliganism or sanitised, corny, Hollywood shit like ‘Goal‘ which uses the old rags to riches storyline. ‘Bend It Like Beckham‘ is not bad but it still has a few sporting/football cliches in it, eg. man explaining to a woman the offside rule using condiments, protagonist on an upward trajectory, pretty poor football action, etc.

Other sports are blessed with top quality movies; boxing, baseball, pool, Jamaican bobsleigh, etc but football seems to struggle especially when you compare world participation against number of well-received films. The beautiful game doesn’t seem to lend itself to being effectively captured on film, ironic when you think of the number of camera angles captured during a top-class game.

I’m probably leaving myself open to a host of foreign football films I’ve never heard of. Please enlighten me if this is the case!

I find working within certain boundaries helps to focus the mind, and in this case, what story is there that people will care about featuring lower standard footballers who aren’t going to win anything at the end of the season?

Aha! I’ve already got an outline and I’ll go through how I got there in another post, but the ref’s blown his whistle, the game’s kicked off.