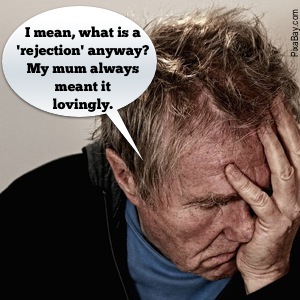 I’m not sure what this says about the current point of my ‘writing journey’ but here’s a post about how rejections could be made easier for the rejector and more meaningful for the rejectee.

I got another rejection last week for ‘Blindsided‘, fine, but the rejection email itself was the usual bland, unhelpful, thanks-but-no-thanks. And I mean unhelpful for both parties. For example, if I were to get 3 rejections saying my first chapter is crap (‘1’ on the rejection scale) then I’ll improve it so the 4th agent to receive my submission will get an improved (hopefully) 1st chapter.

A reply is always good (any reply) as not every agent or publisher replies, but I can’t help feeling that a more meaningful response would help everyone in the long run.

Thanks for your MS but I’m afraid it is not something we want to take any further.

Best of luck with your writing in the future.

So I’ve come up with this rejection scale which would mean the whole reply need only be one number, dispense with any formalities;

5 = interesting but didn’t love it enough

9 = too similar to an existing client

Getting a reply with just ‘1’ would be 100 times better than the form email you usually get. It would also be easier for the agent (or the assistant) than copying and pasting a form rejection email.

OK, some people out there who receive an email with a ‘4’ aren’t going to like it (or even know what it means at this early development stage 🙂 ), but suck it up, it’s still a rejection like it was going to be anyway only this time you have a pointer on why it was rejected. If you get a ‘4’ then make it more interesting.

How many rejections have been sent out because of ‘9’? Do those rejected manuscripts need rewriting? No. So this would also prevent writers wasting their time rewriting (and maybe ruining their MS) and just get on with sending off another submission.

What kind of sadistic agent would reply with ‘7’ or ‘8’? Surely that doesn’t actually happen in real life?

What other reasons might there be for rejecting a manuscript?

Maybe the reason rejectors don’t want to reveal why they rejected someone is because they want to distance themselves from the rejectee. Enlightening the rejectee about why they’ve been rejected may open up grounds for the ‘right to reply’. I NEVER reply to rejections and I would advise anyone else to just shut up, suck it up and submit elsewhere. Like players arguing with the ref, you’ll never talk yourself out of a yellow card or a rejection.

Let me know what you think of this idea whether you’re an agent, publisher or writer. Would most writers get a ‘1’? Does the ‘Rejection Scale’ need rejecting?