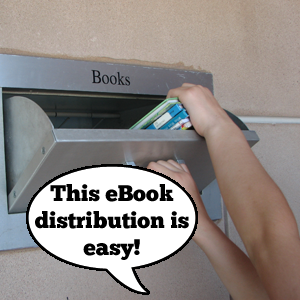 I’ve done my penance on Amazon KDP with pretty poor results so the next step was to spread my wings and get submitting to the other online retailers. The problem with this idea is that submitting to these sites would take time and is about as much fun as chicken pox.

Fortunately, I’d met the people from eBook Partnership who create and distribute ebooks at the Publishing Deconstructed event last September, so I dropped them an email. Turns out they take out all the hassle of distributing to all the main online retailers plus a few foreign ones too for a mere £40. Bargain!

So I sent over my ebook files and cover, completed a form and waited.

I didn’t require Amazon as I’d already submitted to them but a few weeks later I started appearing on a few other retailers. Unfortunately, iBooks rejected my EPUB file because it wasn’t valid, which was annoying as this meant Calibre was churning out non-valid ebook files. Luckily, I’m an ex-web developer so I was able to go in and fix the issue which involved changing the file path to a few font folders – but if you’re unwise to the whims of code and file paths this would mean forking out to get someone else to do it.

Now ‘In A Right State’ is available in a few places, all at a variety of prices around the £1.30 mark.

I haven’t sold any copies yet except 3 at a place called ‘Overdrive‘, who I’d never heard of, but they supply eBooks to libraries all over the world and these sales are broken down to which library downloaded it, which is pretty cool.

Hopefully this extra reach will help sales a little but I’m not expecting anything amazing, it’s all about marketing the book. If no-one’s heard of the book then it makes no difference how many retailers are stocking it.

eBook Partnership have been great value, so I’d recommend them to anyone requiring distribution without the headache.

So now the marketing continues; trying to get blog reviews, Amazon reviews and getting featured on some key ebook newsletters.

And finish off my 3rd novel.