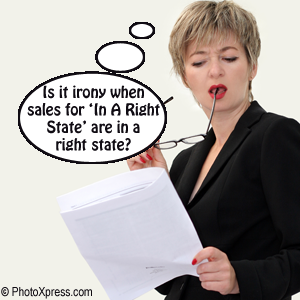 My debut novel, ‘In A Right State’, has now been live on Amazon for 6 months since launching on 7th July 2014, so how has it performed?

Back in February last year I try to define different levels of success in a blog post, ‘Self-Publishing: My goal & defining success‘. According to those goals, I’m just short of ‘success’ (selling 50+ ebooks and getting a few reviews).

But the crux of the matter is how much did I spend? Was this a profitable venture? No. Not even vaguely close.

The grand total including editing, developing and marketing = £1,085.33.

Not great but I’ve ended up with a professionally edited and presented ebook that I’m proud of. There’s also the added bonus of a print-on-demand paperback version which I had never envisioned of achieving so soon.

And that’s after 6 months. If there’s two lessons I’ve learnt through all this is that publishing and the book industry is slow and getting reviews is hard. I have a few review copies out there in reviewers ‘To Read Lists’ and there’s more out there to be contacted, plus I’ve only been selling on Amazon at full price. In the very near future I’m going to get onto the other ebook providers and also start discounting too.

I refuse to offer this book for free purely out of principal, plus it smacks of desperation.

So, that’s the 6 month review, I’ll see if I can improve things for the 1 year review but I’ve also got the 2nd draft of Novel 3 to get on with too. I need to let ‘In A Right State’ go for a bit and let it fend for itself because I’ve already dedicated a whole lot more time and effort into it than I originally planned but that’s because my original plan was so ill thought out and naive as to be ridiculous.

I’m going to write some more blog posts on what I’ve learnt so far. I should have a bit more time to reflect on the few things that have succeeded and the multitude that haven’t.

Oh yeah, plus I need to get stuck into the 2nd draft of the 3rd novel, ‘Blindsided’. PLUS! I’ve got the seeds of a 4th novel which I’m going to mull over and percolate over 2015 too.