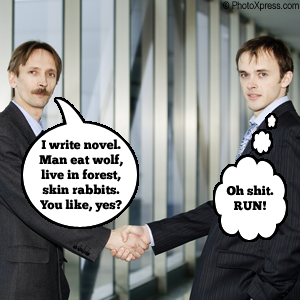 Featured in a recent tweet from @kerrynlaws was a link to this article ‘“A Right Fit”: Navigating the World of Literary Agents‘ which highlighted the need to visit conferences and actually get networking.

Coincidently, only a day later, I listened to this podcast by Joanna Penn interviewing CJ Lyons who essentially said the same thing.

Both article and podcast basically stated that agents have a mountainous slushpile to get through, an almost impossible task meaning the time and energy they devote to yours…and my manuscript could be minimal.  It might be opened when the agent is pissed off, hungry, in a bad mood, tired, deflated…they read your name, have no idea who you are and think ‘Bollocks’ whilst firing off a form rejection with one hand and pouring a whisky with the other.

Get out there and networking actually helps…apparently. Agents get to see if you’re a nutter, have the ability to talk, pitch, interact and generally be a decent person.

Henceforth, the writer moves from anonymous nutter with their ‘Dear Sir/Madam…‘ query, to ‘Hi Jane, we drank Mojito’s together at the last ’50 Shades of Vampire Games’ conference and attached is my MS.‘

It makes sense; adds a face-to-face humanity to the whole beastly business.

But it’s also a bit of a let down, the words and the stories themselves are not enough.

It might explain why you occasionally read a book and think ‘Holy crap, how did that not get rejected?‘. Did that author blind the whole literary world with a shining personality? Or, like with a Mark Rothko painting or Jazz, am I just completely oblivious to this particular form of beauty?

So, if I stick to the anonymous slushpile route, then I’m the proverbial needle waiting to be found in the haystack or I could become more proactive and get amongst it. Get out there, visit a conference, event or whatever these shindigs are called and mingle with some literary professionals and maybe tap one of them on the shoulder and say I’ve written a novel…

…and they turn round and say, ‘Tell me about it…‘

Which leads me on to some more questions. Where are some good conferences to network and how best to pitch without the aid of whooshing arrows in PowerPoint?