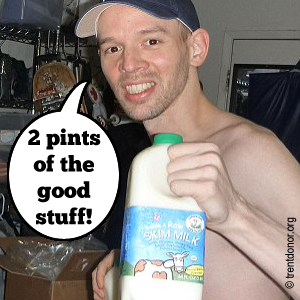 You can read more at The Sun and The Daily Mail websites.

Now, your first question might be, ‘Why the hell are you reading The Sun and The Daily Mail?‘. Fair question. Visit Trent directly – http://trentdonor.org/.

In my short story, ‘Branching Out’ (the prequel to Broken Branches), the protagonist is a professional sperm donor, or ‘Donorsexual’ as Trent has now coined it (Although Trent does his donating for free). This is in a near future where sperm counts have deteriorated to a point where only a few men are able to procreate. They sell their services ‘directly’ not via cups, turkey basters, IVF or suchlike. The classic ‘Wham, Bam, Thank you Ma’am‘ method being the most guaranteed and cheapest way.

As a writer it’s great to see some of your ideas come to life. There’s always been guys making some extra change from donations but Trent is taking it to a new level adjusting his lifestyle to producing the maximum ‘swimmers per shot‘ (You can use that phrase, Trent).

There are a load of  interesting questions raised by donations. Too many brothers and sisters in the same area could result in unintended incest but also, a virgin should be an evolutionary dead-end. Trent’s genes, evidently heavily biased towards being celibate, bird-watching and a technology geek should mean the odds of his genes being passed on are pretty low but technology and his single-mindedness will actually result in the opposite.

How will the future of mankind’s evolution compare to the previous 6 million years? How have technological advances interfered with evolution before? Tools, fire, the wheel and make-up must all have had an effect.

Another issue to consider is when the donor finds a partner and then has to tell her. Check out another donors awkward conversation…over cocktails. Nice touch, Ben.

Blokes with low sperm counts may feel intimidated by Trent and others packing such ‘loaded guns‘ but Trent’s experiences could result in a book on how to increase the number of swimmers, giving the gene pool more depth…

And that’s where ‘Broken Branches’ takes over.