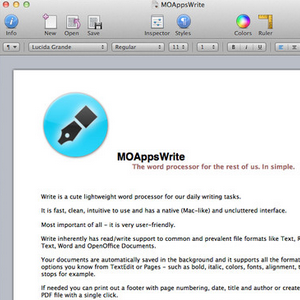 Also, between the last post and the present day, my laptop slowed down to a pace which tempted violence, so I sucked it up and bought a second-hand Mac Air.

Searched for a writing app to go with it and stumbled on MOAppsWrite.

Sweet joyousness followed, along with a severe lack of blogging.

I used to use Microsoft Word for all my writing needs and don’t have a bad word to say about it. It can be overkill but you can rearrange the toolbar settings to have minimal features showing allowing you to get on with the business of scribing.

Tried ‘iA Writer‘ for the iPad, but couldn’t get on with it mainly because I couldn’t get on with using the iPad as a writing machine (another blog post…yes, I’m planning future blog posts too). It’s also too simple and only saves txt files, which is annoying as I don’t want much but I do want at least a little formatting and to be able to save that formatting.

MOAppsWrite is a fairly simple yet stylish application with basic layout and style, headers, footers, word count, save to PDF, printing and search functionalities, only costing £4 (Visit the manual for more indepth information on what it can and can’t do).

There’s a big brother version called, ‘MOApps MyWriting‘ but I’d already bought the simpler one and I can’t see much on MyWriting to justify upgrading.

I’ve used this for the last month and it’s been great in that I’ve hardly noticed changing writing software. I’d highly recommend it.

The only thing I’d request on any future developments is something I was only looking for today; Find and Replace.

As a testament to the fact I’m really enjoying using MOAppsWrite, I named a character after it.

I’ve got an Inspector in my short story and he did have a name but when I looked at the top of MOAppsWrite there is the ‘Inspector’ toolbar and right next to it, the ‘Styles’ one. So I’ve named him, ‘Inspector Styles’.

Am I taking this too far?