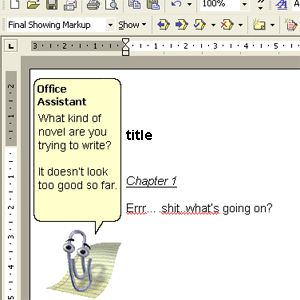 Four months late but I finally cracked open the laptop and fired up Word, created a new file and wrote ‘Chapter 1’.

I don’t have a title which is annoying as the file is saved as ‘Novel 2 – 1st Draft’ but it’s better than no file at all.

I have a basic idea, plenty of notes to back me up incase I find myself down a dead-end, so now I just need to keep freestylin’ and moving forward, never pausing to rewrite, rethink or be repulsed.

The second draft is for rewriting, the first draft just has to be forced out in some kind of vaguely intelligible diatribe. Memories and thoughts of a painful, drug-free birthing process is not an attractive or inviting image to escort me down this road but hopefully it’ll all be worth it.

My aim at the beginning of the year was to start and finish the first draft this year, that’s still my goal even though I’m starting four months behind.  We’ll see how that turns out in 8 months time.

I’ll keep posting updates and key events/dilemma’s as I go. A title sooner rather than later would be nice.