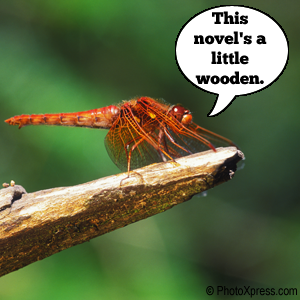 I’ve finished the first chapter of my second novel and I’ve also got a title for it.

All this has happened in a couple of weeks and the first three chapter plan I had before starting has totally been thrown out of the window.

One of Elmore Leonard’s writing tips was ‘Do give the work a name as quickly as possible‘ and not having a title did feel a little weird.

I had a bunch of tentative titles which never really grabbed me and  ‘Broken Branches’ may not stand up all the way to the finish but it’s doing the job of ticking off something on the novel writing to do list.

Tearing up my original three chapter plan is also a breath of fresh air.  Originally I had a two chapter prologue but I’ve scrapped that as it started badly, got worse and succeeded in worrying me rather than satisfying me.

These two major breakthroughs in the whole novel writing process, getting a title and having a first chapter you’re happy with, only came about AFTER I had knuckled down and got started.

I spent a lot of time researching, planning and looking for characters and a story within all that, but I also have to admit spending too much time over-planning as an excuse to not actually take the plunge.

Now I finally have, the research, planning and storyboarding I have done is useful but I also realise it’s subject to change at any time.  Letting the story and characters dictate the direction of the novel may not come easy to especially rigid and OCD writers but if you want things to flow naturally then using your research and planning as a well to dip into now and again for ideas and prompts rather than a stiff, unmoving plan will…well, should result in a better novel.

Every piece of writing advice I’ve read says, ‘Write’.  Just start.  With or without a plan, a plot, a story, characters, location, themes, just start.  You can rewrite, edit and criticise your own writing only once you’ve started.  Personally, I can’t start with nothing, but you shouldn’t wait for everything before starting.

My notebook and thoughts contain the potentiality for unbridled genius or unmitigated shite, but I’m never going to know unless I start writing something down.

And once you’ve started, you’re closer to finishing.