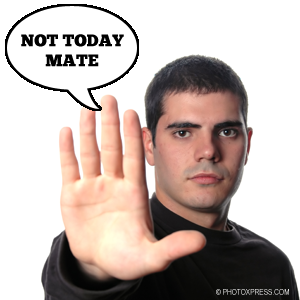 Just before I left for work I saw a London postmarked envelope that didn’t appear to be a bill, so I opened it.

Only my first rejection!  I’m so chuffed!

OK, I’m gutted that they didn’t say yes but you gotta take positives from it.

I’m not going to put the letter up or say who it is as I haven’t asked permission, but it was a very nice rejection letter.  I’m sure this guy’s ex-girlfriends have been dumped very kindly, maybe over dinner whilst he tenderly held their hand and let a tear form in the candlelight.

Of course, after the 57th rejection letter I probably won’t be feeling so forgiving but my first time has been a pleasant one.

Onwards and upwards.  I’m going to have 5 submissions on the go at any one time, so that’s one crossed off the list, time to get another one sent out tomorrow.