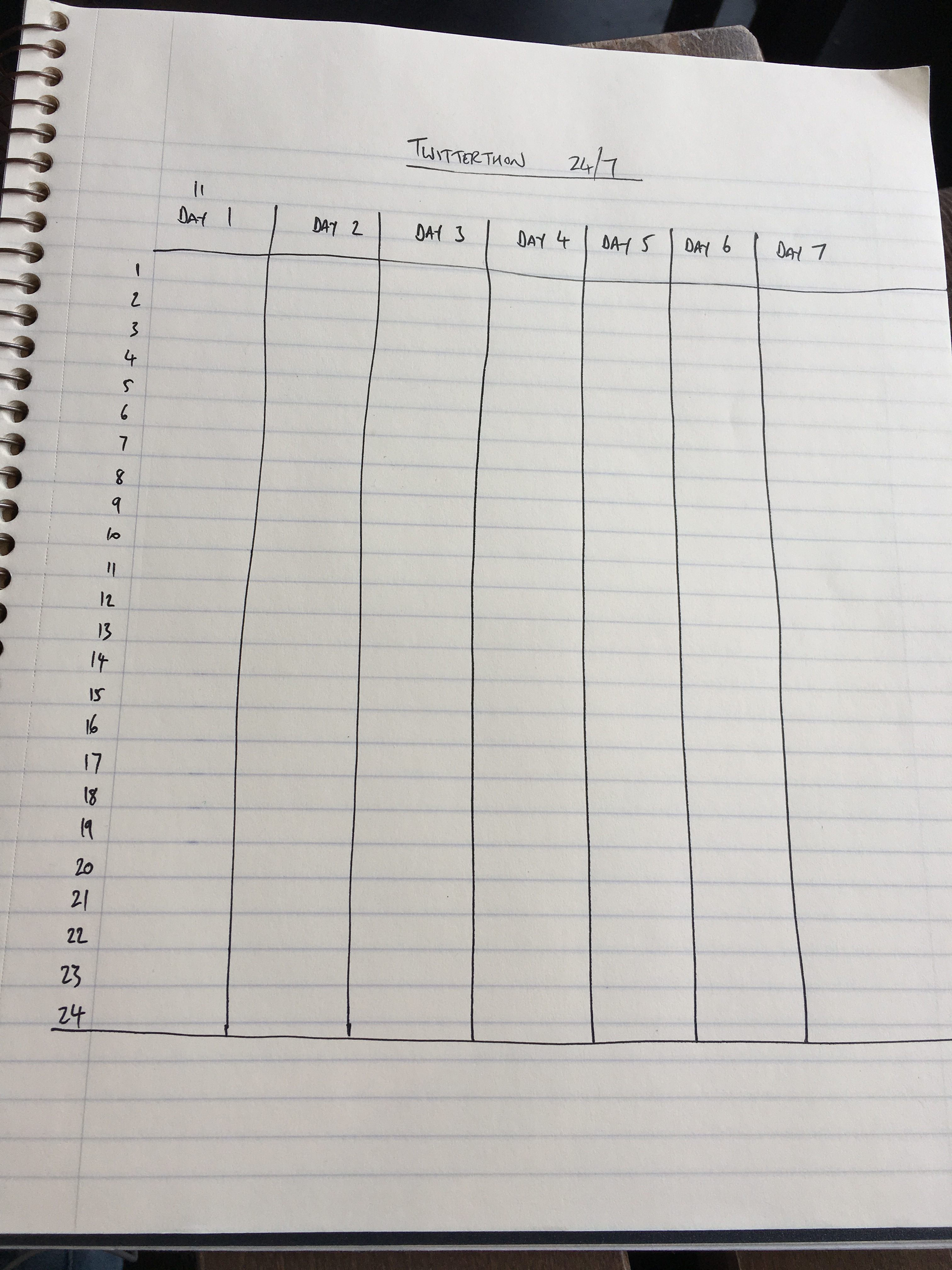 You launch a book and the next thing to do is promote it. In fact, leading up to the end of editing it and sorting out the ebook and paperback formatting, getting the cover done, in the back of your mind is the whole ball-achingly dull process of promoting your unrealised genius to the planet. One idea I had to keep things interesting and try something new was to do a ‘Twitterthon’. I could’ve sworn that I come across this somewhere else but after some brief research, no. I’d made it up and now I know why no-one else had bothered to do it.

The rules were thus; one tweet every hour for one week. That’s 168 tweets to write.

Realising this simple rule into a reality was a lot harder than coming up with the idea. First I started by drawing up a schedule to plan the tweets which brought home the stark reality of 168 tweets.

Next was to find a Twitter scheduling tool as I was not going to stay up for 168 hours straight tweeting out gibberish, which is what would have happened…did happen. I found Twittimer which was a great tool which I highly recommend.

Now for the arduous process of filling those 168 spaces with bona fide tweets. The goal of this exercise was not to sell books but to try and gain some followers, gain some likes/retweets and to generally increase exposure, which in turn should then contribute to some sales. So the content of these tweets should contain some promotional stuff but I couldn’t just spam my followers and hashtags with promo’s, I had to come up with a whole load of original stuff.

As you can see from the final schedule, I managed to fill most of the spaces with a combination of promo’s, links to Goodreads/Amazon/Instagram, reviews, a competition, links to my first book, links to old blog posts which detailed the writing of BROKEN BRANCHES, a tour of my BROKEN BRANCHES notebook, some Instagram videos, some adulterated meme’s, talking about the Twitterthon itself and some other miscellaneous stuff.

Using hashtags was important to help spread the word and get infront of new eyeballs and hopefully snag some as followers. I found Hashtagify and Hashtags really useful for this to gain hashtag ideas and choose the most popular ones.

So how did it go?

The title of this blog post may have given you a hint. Shit. In total I gained 2 followers. I lost a few and gained a few more new ones but the overall total went from 228 to 230. For that kind of ROI I would’ve better spent my money going to a coffee shop and asking 2 people to follow me in exchange for a free coffee and muffin of their choice.

As you can see from the schedule, I didn’t manage to complete the 168 tweets. By about Day 3 I could see things weren’t really happening so I lost all momentum and couldn’t be bothered to finish it. I did a competition to win a free paperback version of BROKEN BRANCHES which only one person entered and she was a beta reader for BROKEN BRANCHES!

What have I learnt from this?

Social media is a fucker but only doing one intense week on it isn’t going to turn it around for you. I really like Twitter but to become a big user with over 10,000 followers with no accompanying offline or online fame then you have to work hard at it and put the hours in. I’ve got better things to do, like write, so that isn’t going to be me. I never thought this was going to be a shortcut to thousands of followers but I was expecting more than 2.

One positive outcome was that I enjoyed doing the videos so I may do some more of them.

I’ve got other promotional ideas in the pipeline so don’t think I’ve shot my bolt just yet, but let’s hope they go better than this. PLEASE!