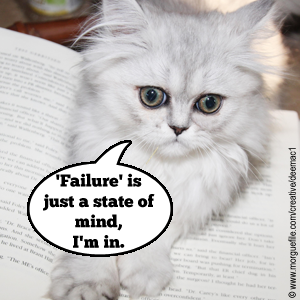 I’m classing a ‘failed novel’ as one that has been submitted to agents and publishers over a year or two without having achieved a sale or any/much interest. This is what happened with ‘In A Right State‘.

‘In A Right State’ is my first novel and I sent it out to about 40 agents and 20 publishers, only getting a couple of sniffs – one agent wanted the complete manuscript but gave up after about 6 chapters, another publisher wanted the whole thing to read but then went ‘dark‘.

I started writing my second novel, ‘Broken Branches‘, whilst submitting the first and then after about 2 years I gave up on the first to concentrate on submitting the second and begin writing the third, ‘Blindsided‘. After finishing the first draft of Blindsided, I wanted to do something else before going onto the 2nd draft so I decided to self-publish my first novel, ‘In A Right State’.

So what led me to this decision?

Firstly, and probably most importantly, I still thought it was pretty good. Yes, it needed some work in places and some serious polishing but I felt the bulk of the novel held up.

Secondly, I was interested in the whole self-publishing process and wanted to give it a go.

A novel may have ‘failed‘ to get an agent or publisher but there may be a few reasons for this; the agent may already have a similar book, they may feel the book doesn’t quite fit in with a specific genre/theme, they may not have any space for any new books or authors, they may not want the inexperience of a first-time writer, you may have caught them on a really shitty day, it might be a shit book…and I’m sure there’s other reasons.

The first thing you want to do is make sure it’s not a shit book. Hopefully your novel has already been read by some beta readers to iron out some basic issues before sending it out to agents and publishers. Now is the time to get a professional editor to give you an overall critique of the book. This will give you a better sense of whether it’s worth pursuing or just filing it under experience. Let the editor know you wish to self-publish and whether they think it has potential – be prepared to pay for an editor to say no. Don’t worry, they’ll tell you why so you can improve for the next novel.

I find myself in the same position with my second novel, ‘Broken Branches’. It’s done even worse, hasn’t got a sniff from no-one! In deciding whether I’ll self-publish it, I’ll ask myself two questions;

If the answer is ‘yes’ to both, then I’ll self-publish this failed novel too. It may cost me a few hundred pounds to get an answer to the second question but it’ll save me money in the long run. If an editor says ‘no’, then I’ll save the cost of cover design, copy-editing, marketing, etc, etc because I’ll scrap the whole idea. If they say ‘yes’, well, a critique is a cost I was going to have to pay anyway, so if you go ahead with copy-editing from the same editor you should get some kind of discount for buying 2 services!

So pick up that failed novel and give it one more read through. Do you have the heart and motivation to spend another year breathing life into it? Does a professional editor agree with you?