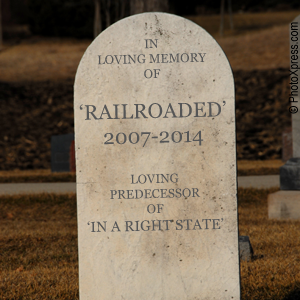 One of the first comments I got back from my editor on her critique of ‘Railroaded’ was; the title needs changing.

She put it better than that. For a near-future sci-fi novel with no trains, railways, railroad companies or the like, it sounds a bit antiquated…and confusing.

I chose ‘Railroaded’ because it’s about how everyone is getting led by companies into doing things that aren’t in their best interest. She stated the problem wasn’t the reasoning behind the title, it was that the title could be misleading on it’s own.

It all made terribly sound, good sense, so I was compelled to think of a new title.

Do you know how hard that is? It’s been known as ‘Railroaded’ since 2007, when the first draft was getting started, and now I had to change it! How?

In my notes I already had a few pages of potential new titles I brainstormed a few years ago when I made a half-hearted effort to come up with a new title. I looked through the thesaurus and kept my ears open for words I liked. I had the title, ‘The Acquiesced’, for a few weeks but wasn’t 100% confident about it. I’m not sure how I actually came up with ‘In A Right State’, it’s not on that list of brainstormed titles, I think it just came to me one day so I let it sit, mulling it over until it started to sit comfortably.

I double checked it with Sophie, my editor, and she said yes. So it’s a goer!

I like that it works on two levels. Firstly, in a literal sense of the story being about a country under a right leaning, very small government, controlled by capitalism. Secondly, the playful, humorous slang meaning of the country being in a mess.

Also, the title makes absolutely no reference to trains, railways or railroad companies…just like the novel itself.

Now I’m here with a new title, the bulk of the editing done, starting the cover design process and feeling a whole lot happier with the book than before. I also changed one of the main character’s names too, because, what the hell, when you’re editing, everything’s up for negotiating, right?