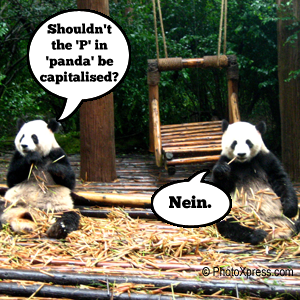 I’m not a full-blown grammar Nazi so I’m going to refer to myself as a grammar panda since recently reading ‘Eats, Shoots and Leaves‘ by Lynne Truss, mainly  in preparation for redrafting one novel and self-publishing another, thinking I need a refresher in all this boring, technical stuff.

I have a basic knowledge of punctuation and a personal style sheet but I’m in no way an advanced student of grammar or language. I don’t know anything about past participles, future perfect, my limit is that verbs are ‘doing words’. If that’s not right, then I’m fucked.

It’s like learning scales in music or the offside rule in football; it’s boring but it has to be done if you don’t want to look like an idiot.

You see what I just did there? I used a semi-colon. Not a colon or a comma, or a dash or ellipses. Why? I’m not sure. A comma isn’t enough because it’s not a flowing sentence that requires a ‘breather’, the words following the semi-colon are a ‘reflective thought’ on the words proceeding the semi-colon. I never use a dash. I only seem to use ellipses in speech to indicate a longer pause than a comma can achieve. So a semi-colon it was and so it shall remain.

But that’s the thing that came out of reading ‘Eats, Shoots and Leaves‘, there are some hard and fast rules (capital letter at the beginning of a sentence, full-stop at the end, apostrophes) but surprisingly a lot of it is down to personal preference…within reason.

This is only in regards to grammar though. Not spelling. Apart from the odd spelling differences between countries, there’s no personal preference on how to spell miscellaneous or definitely.

Reassuringly, in that book Lynne Truss does state that British education didn’t bother with all this grammar stuff much so we usually have a poor grasp of it. This confirms why when speaking to some foreigners about English they might enquire, “How do you modify the adjective when it’s in the past?”

If you asked me to dissect these sentences highlighting the verbs, adjectives, nouns, conjunctives, etc, I’d have to simply run away, screaming.

So, anyway, here’s my personal style sheet and interpretation of the rules:

That’s 11 rules there. I should have called this blog post, ’11 grammar rules for writers’ but since I don’t want agents and publishers to see this the last thing I want are loads of visitors.

What are your own interpretations of these grammar rules and others? Am I doing anything blatantly wrong? What rules have I not addressed which requires the opinion of someone who refers to himself as a’ grammar panda’?