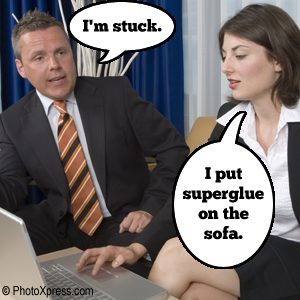 This is the first post in a while. I hit a wall with the novel and when that happens everything else writing related takes a hit too.

I’m about a third of the way through my third novel, ‘Blindsided’, and had no idea where else to go even though I had the general structure done and was happy with it. The problem I was having consisting of building a compelling story and not just filling in the gaps with crap. I still went to the coal face and chipped away at a few sentences on a regular basis but, generally, it was pretty poor progress. I always had my fingers crossed, hoping inspiration would strike and away I’d go again, rejuvenated.

Then a close friend asked how it was going. I gave the usual shrug of the shoulders and hoped that was the end of it. You write by yourself, right? How can someone else help?

She could see I wasn’t happy and persevered with it, showing an interest. I opened up a bit more, explained the structure I had, where I’d stopped and some of the dead ends I’d considered but not followed through with…well, they’re dead ends aren’t they.

Half an hour later, she’d drawn a timeline of the novel, who was doing what to whom and where, leaving the gaps yet to be filled in more obvious. We then discussed how these gaps could be completed, in other words, how do the two main characters live their lives within these gaps?

My friend isn’t a writer or much of a reader but that didn’t matter; she was interested in my novel. She wanted to talk about it, not in a writerly way criticising my metaphors or highlighting any nonsensical wordplay, simple chat about how two characters could live out their lives.

It’s not the sort of thing you can chase after but if it appears, use it. Don’t be afraid or too proud or too precious. It was so helpful just bouncing ideas off  someone else, lifting my head out of my notebook and actually talking with another human being.

Maybe letting someone in between yourself and the blank page can help. Not peering over your shoulder nodding or tutting with every word you write but just to knock some general ideas and plot themes into shape.

The day after our discussion I had a chapter by chapter plan for the first half and about a quarter of the second half, which was a lot more than I’d had 24 hours earlier. Most importantly, I’d got back my momentum and enthusiasm for the novel.

And she said she had fun; controlling people, giving them dilemmas, watching them squirm.

Sounds like she’ll be writing her own stuff soon.