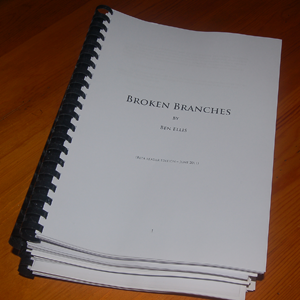 A printers opened up near me, infact, it’s technically the nearest retail establishment to my flat.  This maybe a coincidence but I like to think of it as fate.

So it would be rude not to go to them to get my 3rd draft printed to dish out to some local beta readers.  Pictured is the result.  6 manuscripts printed; 1 for me, 4 for others and 1 spare incase someone else nearby wants to give it the once-over.

Living during these heady first days of the ebook revolution, it’s always nice to see your novel in the flesh of printed paper.

I’m going to give it a month or two before I read through it again, just to have a rest and try to approach it again with some semblance of freshness.

I broke a few manuscript formatting rules because I’m giving it to beta readers and not submitting it to agents/publishers.

I’ve sent a couple of other people PDF versions as they’re further afield than Sunny Worthing.

If YOU want to take a gander, with merciless vengeance a constant companion on your shoulder, then go here!