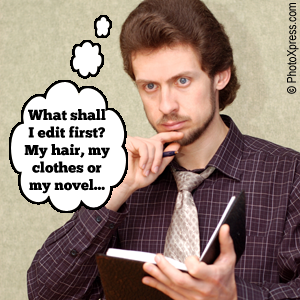 Yesterday I completed the 2nd draft of ‘Broken Branches’ which I had hoped would involve plenty of artistic styling and subtle moulding…but turned out to be fixing a ton of inconsistencies, deleting gobbledegook and generally reacquainting myself with the whole story.

The inconsistencies stemmed from facts changing from one chapter to another because editing 2 chapters might only take a week but writing them could’ve taken a couple of months. There was a lot of changing the weather, seasons, clothing, directions, race of a few characters plus a few names.

The gobbledegook originated from mixed metaphors, convolution and writing myself into cul-de-sacs of meaningless. It sounded good at the time but rereading it months later, the cold light of day did not do it any justice.

Took me about 3 months in total which is a month longer than I expected.

Anyway, the positives to come out of it are;

a) I can see the areas needing to be fleshed out and specific events/actions that need to be sprinkled around in certain places to give more meaning and context.

b) I like the story (I’ve read articles saying you should hate it but I think they’re referring to the first draft…but I still liked it after the first draft so don’t believe everything you read).

The third draft isn’t going to be a full read through, just going directly into places and adding stuff. Hopefully this will just take a month, so by the end of May I should be done.

The 4th draft will be a full read through with a special eye towards technical errors as per – Ten Mistakes Writers Don’t See (But Can Easily Fix When They Do). I’ll give that another month and then dish it out to a few beta readers, probably in July.  If you’re interested in being a beta reader then go here!