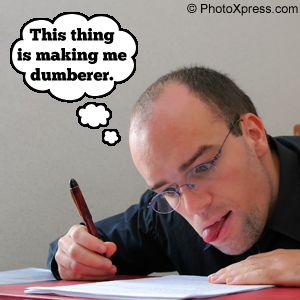 A step forward, that’s what I keep telling myself anyway.

An agent came back and asked to see the full manuscript of ‘Railroaded’, but then quickly rejected the whole thing.

I’ll ignore the obvious negative and take some positives;  I grabbed the interest of a literary professional and, albeit briefly, viewed the slush pile from the outside.

She gave good feedback, some of it highlighting some points I was already conscious of and keen to avoid/focus on for Novel No.2.  So having someone else comment on these aspects too means I must be ever so slightly thinking along the right lines.

At university, a mate and I went round some London ad agencies with a portfolio of print and billboard ads we’d drawn up.  One agency creative pairing were really nice and praised us, the other were OK but bland and the third tore us a new arsehole.  I learnt so much and remember more fondly the agency creative that ripped us to shreds than the other two.

That didn’t happen here, she was very nice and friendly (agents DO have hearts!) but while this was the closest I’ve been yet it resulted in failure, I’ve got some valuable expert feedback, had some things confirmed which I thought I already knew and feel more confident going forward with this experience.